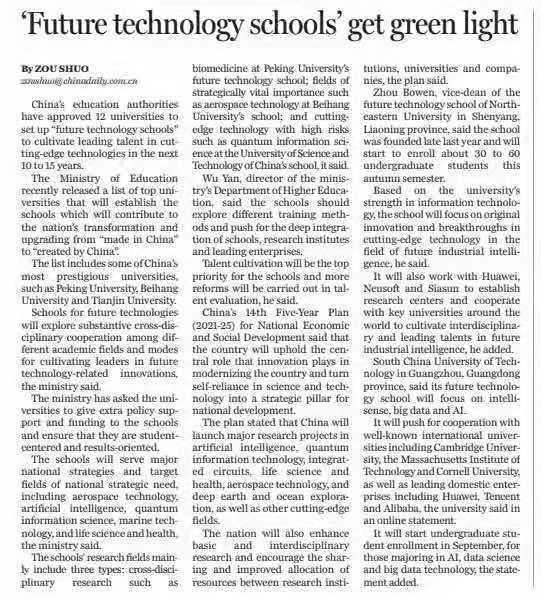 China’s education authoritieshave approved 12 universities toset up “future technology schools” to cultivate leading talent in cut-ting-edge technologies in the next10 to 15 years.

The Ministry of Educationrecently released a list of top uni-versities that will establish the schools which will contribute tothe nation’s transformation and upgrading from “made in China” to “created by China”.

The list includes some of China’s most  prestigious  universities, such as Peking University, Beihang University and Tianjin University. Schools for future technologies will explore substantive cross-dis-ciplinary cooperation among different academic fields and modesfor cultivating leaders in future technology-related  innovations, the ministry said.

The ministry has asked the universities to give extra policy support and funding to the schools and ensure that they are studentcentered and results-oriented.

The schools’ research fields mainly include three types: cross-disciplinary  research  such  as biomedicine at Peking University’s future technology school; fields of strategically vital importance such as aerospace technology at Beihang University’s school; and cuttingedge technology with high risks such as quantum information science at the University of Science and Technology of China’s school, it said.

Wu Yan, director of the ministry’s Department of Higher Education, said the schools should explore different training methods and push for the deep integration of schools, research institutes and leading enterprises.

Talent cultivation will be the top priority for the schools and more reforms will be carried out in talent evaluation, he said.

China’s 14th Five-Year Plan (2021-25) for National Economic and Social Development said that the country will uphold the central role that innovation plays in modernizing the country and turn self-reliance in science and technology into a strategic pillar for national development.

The nation will also enhance basic  and  interdisciplinary research and encourage the sharing and improved allocation of resources between research institutions, universities and companies, the plan said.

Zhou Bowen, vice-dean of the future technology school of Northeastern University in Shenyang, Liaoning province, said the school was founded late last year and will start to enroll about 30 to 60 undergraduate  students  this autumn semester.

Based  on  the  university’s strength in information technology, the school will focus on original innovation and breakthroughs in cutting-edge technology in the field of future industrial intelligence, he said.

It will also work with Huawei, Neusoft and Siasun to establish research centers and cooperate with key universities around the world to cultivate interdisciplinary and leading talents in future industrial intelligence, he added.

It will push for cooperation with well-known international universities including Cambridge University, the Massachusetts Institute of Technology and Cornell University, as well as leading domestic enterprises including Huawei, Tencent and Alibaba, the university said in an online statement.

It will start undergraduate student enrollment in September, for those majoring in AI, data science and big data technology, the statement added.