Professor Feng Xiating, an academician of Chinese Academy of Engineering and the president of NEU, was invited to deliver a special report titled Excavation Induced Deep Hard Rock Fracturing: Methodology and Application as the lecturer of the year for the “Qian Qihu Lecture”. This report elaborated the stability assessment and control principle of surrounding rock in deep engineering by focusing on the mechanism, method and practice concerning the fracturing process of deep excavation engineering, as well as deep engineering typical disasters, testing technology and equipment, analysis software, fracturing control theory and method, and engineering application cases. After the report, professor Qian Qihu, a winner of the “State Supreme Science & Technology Awards” and an academician of the Chinese Academy of Engineering, presented the trophy and certificate to Feng Xiating. 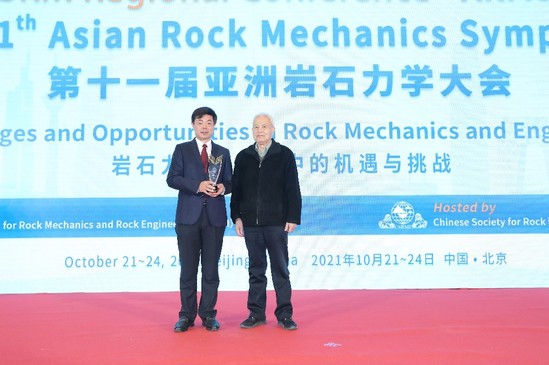 The dissertation titled Study on Aging Fracture Mechanism and Long-term Stability of Deep TunnelHard Rock by doctoral student Zhao Jun from the Key Laboratory of Ministry of Education on Safe Mining of Deep Metal Mines won the “Science & Technology Awards: Excellent Doctoral Dissertation Award” by CSRME. A total of 10 people from across China won this award.

During the symposium, such achievements as true triaxial test apparatus, intelligent monitoring and early warning system for rockburst, rock mass damage and disaster control methods in deep engineering, and safe and efficient mining of deep metal mines independently developed by the Key Laboratory of Ministry of Education on Safe Mining of Deep Metal Mines were presented online and offline, and received attention and praise from the guests. 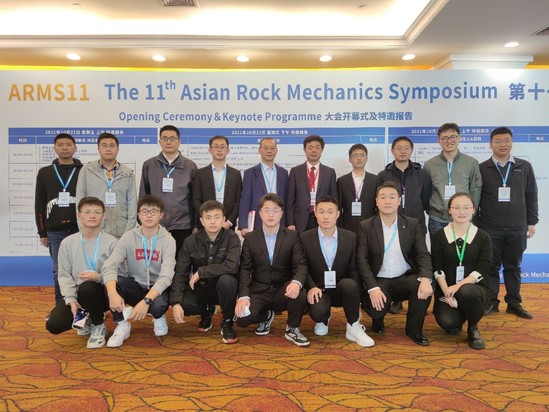 The “Qian Qihu Lecture” is sponsored by CSRME, and co-organized by the Institute of Rock and Soil Mechanics of CAS and Wuhan University. It is held once a year, and the lecturers are well-known experts with high reputation in the field of rock and soil mechanics and geotechnical engineering at home and abroad.