On the morning of April 21, principal Feng Xiating received a delegation led by Katae, the consul-general of Japanese consulate-general, in Shenyang at Room 203 of Hanqing Conference Hall. The meeting was attended by relevant persons in charge of the Foreign Affairs Office of Liaoning, the International Cooperation and Exchange Office of Northeastern University and the School of Foreign Languages.

Feng welcomed the visit of the delegation and expressed gratitude to Japanese consulate-general for the support and assistance in promoting the exchange and cooperation with Japan all the time. Feng hoped that, both countries could take the chance of the Olympic Games and the 50th anniversary after the normalization of diplomatic relation between China and Japan, both sides could further deepen the cooperation in such fields as education, science and technology, culture and youth exchange, and promote the exchange and cooperation between Japan and Northeastern University. The Japanese consulate-general in Shenyang was also willing to try to render assistance without reservation.

On the meeting, both sides also compared notes on such aspects as the science of robotics, the integrative development of sciences and humanities, the online teaching and the employment and development of students. 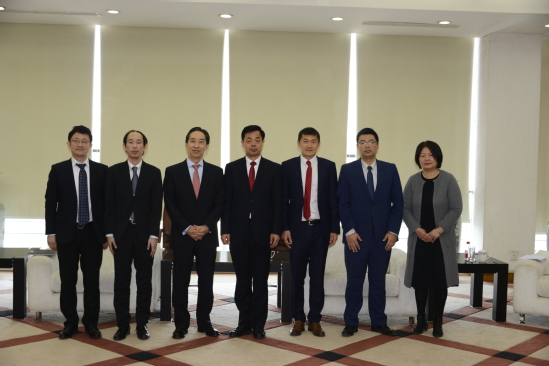 After the meeting, the delegation also communicated with teacher representatives from the Japanese department of the School of Foreign Languages on such topics as communication with Japan and the employment of Japanese majors, and visited the library and teaching and research office of the school.